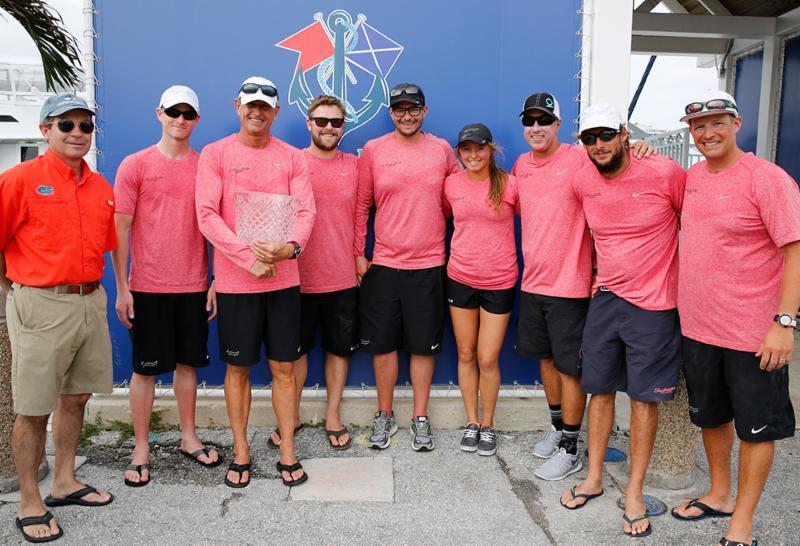 Congratulations to Dick DeVos on Volpe as he is the 2016 Melges 32 Lauderdale Cup Champion, simultaneously snapping up the first ever Blue Water Series Ranking Champion title. Alongside Dick for most of the ride has been a steady crew that included tactician Mark Mendelblatt, Scott Nixon, Sam Rogers, Drew Weirda, Peter Kinney, Erika Reineke and Mike Hill.

“We have such great group on the boat. This is the best sailing I have ever done,” said a very humble and happy Dick DeVos post-awards. “We had a great weekend and things went well. There are some really great teams out here, so we have to give credit to everyone here – Argo, Delta, and the kids (Team Hydra). I feel very fortunate, and look forward to more great sailing. Really looking forward to sailing more this year in Newport, because there is no better place to sail than Newport in the summer (Nationals – August 19-21, and Worlds – September 29 – October 2).”

“I am so proud of these kids. They just keep getting better, better and better. I mean, we won another race today,” said Kullman. “We got a bullet everyday in this regatta and one on the last day, of the Gold Cup. So, they have done such a great job.”

“The goal of this entire program was to get these kids some experience, that they can take to other teams and say ‘hey, let me come and help you.’ And now, with a few bullets under their belts (5 this weekend alone), we look forward to all the challenges ahead for us at Nationals in August and of course, there is the Worlds to get ready for too.”

So many teams exceled this weekend. From Jason Carroll’s Argo (finished second overall) that battled so hard against Dick DeVos in the final moments of the Race Eight, to the acceleration of Chris Wientjes’ Stormvogel getting up much more frequently into those top three positions and, of course Andrea LaCorte on Vitamina Amerikana and Grant Hood’s Quest (second Corinthian overall) teams improving with every race.

A big round of thanks

Without the vital dedication of the Lauderdale Yacht Club, the 2016 Melges 32 Blue Water Series would not have been possible. The unwavering support of Commodore Jim Lang, PRO Clyde Wright, Event Chair Lisa Friesecke, Tom Lihan, Peter Commette, Fred Welker and the countless other volunteers made the Blue Water Series a huge success!

Most especially thanks to the teams who participated. Without you it would not have been the amazing Series that it was – you set the pace, you write the stories that make this the best grand prix class in the world! A very special round of thanks, appreciation and gratitude goes to Grant Hood, the DeVos family, Ed Tillinghast and Richard Goransson for the awesome parties, dinners, cocktail hours that further enriched the Melges 32 Class culture.

Next week, the first event of the 2016 World Sailing Series kicks off in Porto Vernere, Italy. An incredible season is planned, so please stay close to all Melges 32 Class channels for the latest and greatest news, updates and results.

An amazing summer is being planned and prepped in beautiful Newport, R.I. for the International Melges 32 Class. View the Official Events Schedule at melges32.com/?p=events-agenda and plan to attend some awesome regattas. In particular, be sure to register up for the U.S. National Championship on August 19-21 and then, the Worlds on September 29 – October 2 all hosted by Sail Newport!

Full results and more photos at the event website